BioShock speedrunner trolls the world with that Skyrim meme - GamesRadar+ 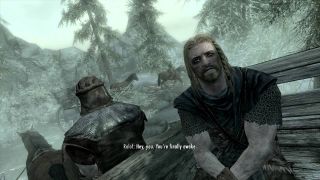 Crashes are usually tragic for speedrunners, especially if they're on the grand stage of Awesome Games Done Quick. They're anticlimactic heartbreakers that mean either starting over from the beginning or giving up entirely if the schedule demands. They can also be a great opportunity for some unexpected comedy. That's where BioShock speedrunner BloodThunder took it yesterday on the AGDQ livestream, and it was a rollercoaster ride.

BloodThunder reached Andrew Ryan's office just over a half hour into his run. Then he used a glitch to bypass Ryan's lengthy speech where he tells you about free will then makes you beat his head in with a golf club - "some weird stuff can happen" if you try this, BloodThunder warned. With Ryan still talking, BloodThunder went to plug in the genetic key and complete the game's climactic twist… then this happened.

A blue screen of death, followed by the intro to Skyrim, then back to BioShock. If you've been living in a Meme Exclusion Zone, it's become a huge thing to splice in Skyrim's opening moments - where your character wakes up in the back of a wagon - into other games, movies, TV shows, anything. To further overexplain the joke, it's a riff on the "Bethesda can't stop making Skyrim" gag. I reckon this surprise appearance during one of the most popular events on Twitch will mark the pinnacle of the meme's unholy power.

BloodThunder pulled off the speedrunning comedy heist of the century by surreptitiously modding the game so the Skyrim video would play at that specific point. He didn't tell anybody on the crew beforehand - those gasps from the commentators and crowd were all unstaged. And yes, he did apologize for nearly giving the poor behind-the-scenes technicians several heart attacks.

I purposely didn't tell them, they knew I had something planned but didn't know what it was going to be.January 10, 2020

Learn more about the future of BioShock with this interview with its new studio head. It definitely isn't going to be Skyrim.

Connor has been doing news and feature things for GamesRadar+ since 2012, which is suddenly a long time ago. How on earth did that happen?
Read More
You Can Share It :